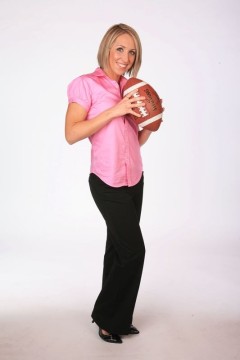 A naturally rambunctious child, I couldn’t sit still long enough to watch a full TV program, except for when Bob Costas was commentating gymnastics during the 1992 Olympics. Then in 1993, at age eight, I witnessed Tampa Bay Buccaneer Horace Copeland perform a celebratory backflip in the end zone.

That’s when my football fan hood began. They were still being called “The Yucks” back in those days, but as a gymnast myself, it sure got my attention. To this day, I’m still a sucker for ‘end zone gymnastics,’ even more than the actual gymnastics I loved so much growing up.

I took those gymnastics skills to the sidelines of college football and became a cheerleader for the University of South Florida Bulls. Being a part of USF’s then up-and-coming athletic program nurtured my love of football and college athletics.

I was part of the team’s first season in the Big East, first bowl game, and first bowl win. Heck, I even felt like part of the team myself when former football coach Jim Leavitt and I would “talk shop” in the stands at baseball games.

The relationships I cultivated through USF athletics, combined with my dedication in the classroom allowed me to pursue several internships as a student. As a junior, I wrote for Fox’s Scout.com, writing Big East weekly game previews, and honing some of the online writing skills I developed in the Multimedia Journalism Program.

I was then selected as one of two journalism students for a prestigious Scripps Howard Internship and Scholarship Program, where I spent an entire summer as an employee of ABC Action News, one of the top TV stations in the state of Florida, and in the country.

I would return to ABC Action News as a senior, and pursue another broadcasting internship, this time in the Sports Department, juggling my time there with my duties as Producer and an Anchor/Reporter for WUSF TV’s Florida Focus news show.

Upon graduation in 2007, I covered Buccaneers Training Camp for the Tuscaloosa News, before accepting a job as a Multimedia Reporter for Pewter Report Magazine, the magazine of the Tampa Bay Buccaneers.  I covered the team from Training Camp, through the regular season, playoffs, the Senior Bowl, Free Agency, to the 2008 NFL Draft.

After Pewter Report, I spent some time pursuing my second love – competitive fitness, and won the 2008 Southeastern USA fitness title and finished runner-up at the NPC Europa Show of Champions.

Working as a freelancer for several newspapers, including News Day and Metro Philadelphia allowed me the flexibility to train for these competitions, while expanding my horizons as a major league baseball writer for the New York Yankees and Philadelphia Phillies. It also gave me the opportunity to work as a production assistant for NFL Network during Super Bowl XLIII in Tampa. (Oh and I met Bob Costas there too.)

I returned to writing full-time in the fall of 2009, accepting a position as an SEO copywriter and web marketing specialist for Digital Eel Web Design, which is where I am today. I also returned to the NFL press box as the official Bucs writer for NFL.com’s Blog Blitz, powered by Sports Fan Live.

While my in-season coverage was exclusively Buccaneer-related, my Blog Blitz duties expanded during the playoffs, where I provided live-blog coverage of the New York Jets, Minnesota Vikings, New Orleans Saints, and the Indianapolis Colts. I then spent a week down in South Florida reporting on both the Colts and the Saints for Super Bowl XLIV.

And I was there for EVERYTHING – Media Day, all the ruckus on Radio Row, the NFL Hall of Fame voting, the game itself, and daily player interviews. The result? 17 stories, including features in newspapers such as Greenwich Time, the Connecticut Post, and News Times. Needless to say, I was a busy girl in Miami and came home pretty darn tired. But, I’m a firm believer that when you truly love something, it doesn’t feel like work, even when it means getting only three or four hours of sleep a night.

And speaking of Hall of Fame voting...

I'm a firm believer that God puts you in certain places for a reason. While covering the NFL Hall of Fame voting in Miami, I witnessed Emmitt Smith, one of the greatest running backs in the history of high school, college, and pro football get voted into the NFL Hall of Fame. In Mr. Smith's announcement speech he said, "A dream is a DREAM, until you write it down. Then, it becomes a GOAL."

Hearing Emmitt say that was a true God-send for me. It not only reaffirmed my commitment to a life-long dream, it made me realize that it wasn't a dream for me anymore. It was a GOAL! In fact, according to Emmit's theory, it had been a goal since I walked across the stage on graduation day from USF. I wrote "ESPN" in green and gold glitter on top of my graduation cap! I made my quest known to the world, and from that day on, I would be accountable to fulfilling it!

Now I'm constantly reminded of it, each day when I get out of bed, with the cap staring at me on top of my dresser. So I spring up, and the first thing that comes to mind – “Wow, that would make a really good story!” (Okay, sometimes the story ideas don’t come until after I’ve had my cup of coffee, or twenty minutes into my treadmill run while watching Sports Center)…but, as long as those ideas keep coming, and that graduation cap stays on my dresser, I'll continue pursuing what I love, and chasing my destiny.